Catholics worldwide are used to seeing the Latin cross inside and atop our churches. It is one of the most recognizable and best known symbols of Christianity. But did you know that there are other “crosses” that have long provenance in Christianity? In addition to our familiar symbol, there are also the Greek, Maltese, Papal, Patriarchal, and St. Andrews crosses.

Perhaps the oldest pattern of the cross is called the “tau” cross – the cross that is associated with the Franciscan order. But did you know that it is most likely that the “tau” was the standard form of Roman crucifixion? The vertical member was already mounted at the place of execution. The horizontal member was carried by the victim from the place of judgment to that of their execution.

The name “tau” was associated with the cross because of its shape and because “tau” is the last letter of the Hebrew alphabet already in use symbolically in the Old Testament. It was already spoken of in the Book of Ezekiel: “The Lord said to him, ‘Go through the city, through Jerusalem, and put a mark upon the foreheads of the men who sigh and groan over the abominations… (Ez. 9:4). The Tau was the sign placed upon the foreheads of the poor of Israel, as a sign they were to be saved.

This was adopted early on by the first generations of Christians who were Jewish. It was a two-fold reason: 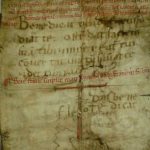 “Whenever necessity or charity required, St. Francis marked with this seal the letters he sent” (FF 980); “He began all of his actions with it” (FF 1347). The Tau was therefore the sign dearest to Francis, his seal, the telltale sign of a deep spiritual conviction that the salvation of every man is only in the Cross of Christ.

Thus the Tau, which is backed by a solid biblical and Christian tradition, was received by St. Francis for its spiritual value. The Saint of Assisi took hold of this sign in a manner so complete and intense that, at the end of his life and through the stigmata impressed in his flesh he became the living image of the Tau that he had so often contemplated, drawn, and especially loved.